So this week Visual Studio Team Services build and release saved me and my team.

At our company we have configured an on premise continuous integration server along with build agents using TeamCity which is a product from JetBrains. TeamCity Professional is actually a free application that allows you to run 3 build agents. The only cost is the associated hardware and Windows licensing. I fell in love with TeamCity years ago when I set it up at our company and it’s been a very stable and a versatile CI server since. However this week I ran into some issues with our TeamCity server and the fact that it was on premise only added to the problem. Let me explain.

Our build server physical infrastructure is actually located offsite from our office (along with other dev/qa servers), so when I say on premise I really means its dedicated hardware that we own and not up in the cloud. The situation we ran into is that our TeamCity server didn’t restart properly and was unavailable by remote access by the ITOPS team, this meant someone had to go to the offsite location and reboot the server. Now you might be wondering, why don’t you have a backup…a good question and something I’ll be looking into.

What made matters worse is that we we’re nearing the end of a regression cycle and we wanted to deploy later this week. So having our build server drop off the grid was just bad timing and it meant DEV and QA were in a holding pattern while we waited for our build server to be brought back up and hopefully it was ok and not corrupted or worse.

While we waited for our build server to be restarted I started thinking about worse case scenarios like what if our build server is dead and we need to rebuild or restore from a backup (and what do you know it was out of date). None of these options can be done quickly and they require unplanned resources from the ITOPS team and myself.

Having already explored Visual Studio Team Services (VSTS) build and release services for my personal development and that of our Live .NET logging tool ReflectInsight, I knew I could easily and quickly get one of our applications setup in that continuous integration pipeline. You will actually be shocked at how quickly I got things going.

To get started I headed over to my Visual Studio Team Services account I had setup with my MSDN subscription and I then created a new project to contain my builds. I then clicked on the Build & Release tab and then clicked on the New button to create a new build definition:

I then clicked on the ASP.NET (PREVIEW) featured template:

I then configured the Get sources task to point to our GitHub repository and then I added in the last two steps for generating a NuGet package and to copy the generated NuGet package to an Azure Storage account: 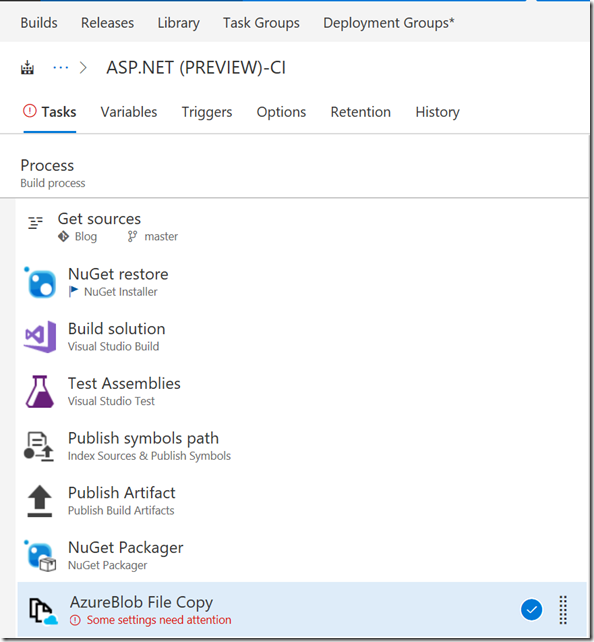 I wont go into detail for each of these build tasks as their pretty straight forward, but after I had everything setup and tested, I looked at the clock and it was under 15 min from start to finish. That is something I could never have done in our existing on premise build infrastructure and it now looks like I have my backup solution.

One of the nice things about using the hosted agent in VSTS is that it’s located in Azure and its a service that is managed by the Azure team. This means I spend more time focusing on developing my applications and less time worrying about managing the associated build infrastructure and what happens if a server goes down, performing backups, restores and that all hands on deck feeling when your infrastructure goes down at the worse possible time.

It's all about Microsoft Business Applications

Cloud Computing with a side of Chipz

If you're not having fun, you're doing it wrong.