I’ve been using Visual Studio 2012 for just over a week now and I’m really liking all the new features and functionality that comes with it. However I’m still not a huge fan of the new light/dark themes. I would like to use the Dark theme, but find it’s just too dark. It would be nice if they made it a few shades lighter.

Anyway I came across the following blog post on Jason Zander’s blog about the Top 12 of Visual Studio 2012 and I thought I would share it.

In summary, with Visual Studio 2012 you can:

The C-46 has arrived! I know I know I know, how is it possible that new content has appeared for Microsoft Flight after development was discontinued? Well it seems as though this aircraft was complete, but they still needed to do the paperwork to get it released.

You can read more about the release of the C-46 on Microsoft Flight here and here.

This plane was originally built as a cargo and troop transport during WWII. This twin engine aircraft can carry up to 17,000 lbs of fuel and cargo to almost any remote and rugged landing strip. It has a relatively high cruising speed of 200 kts and a maximum range of 1500 miles. This makes it the perfect cargo aircraft for Alaska.

I think this is a great addition to Microsoft Flight and is an aircraft I look forward to flying. It’s too bad that there is no cockpit view.

I know I’ve mentioned this in the past, but I really wish there was a way for the community and 3rd party vendors to create additional content (aircraft, maps, etc) for Microsoft Flight.

Today Microsoft has made Visual Studio 2012 and all it’s related products available to download. You should note that with the 2012 edition, Team Foundation Server Express is available. Sweet!

Attend the launch event on September 12

Microsoft plans to launch Visual Studio 2012 in a virtual event on September 12. Details are to come, so mark your calendars and check the website for further details. 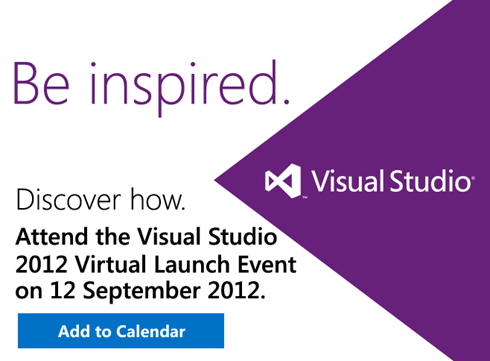 Here is a sample screenshot of the final build of Visual Studio 2012. Notice that the menu bar text is still in uppercase. I read somewhere that there is supposed to be an option to configure this and use mixed case instead. Either way I’m happy. I firmly believe in the Metro design, so will be leaving it as is. I may however use the dark theme.

I’m looking forward to getting the bits on August 15th and turning my ideas into software.

Today was a big day for Microsoft. They officially released Windows 8/RT and Windows Server 2012 to manufacturing and as expected, the final build number is 9200.

The OS launches to the general public on October 26, which is also the same day you can get your hands on a Windows Surface tablet. I can’t wait to try one out.

As with this announcement, the Windows Store is also open for submission of paid applications.

If you’re a developer, then you will be able to get Windows 8 from your MSDN or TechNet subscription starting on August 15.

You can either upgrade for $39.99 (US) or with a purchase of a new PC. If you happen to buy a new PC from now until January with Windows 7, you will have the opportunity to upgrade to Windows 8 Pro for $14.99 (US).

I’m looking forward to trying the final version of Windows 8.

Cloud Computing with a side of Chipz

If you're not having fun, you're doing it wrong.